The traffic on Britain’s roads has started creeping back up during the past couple of weeks, but – as you may have noticed when out shopping, exercising or going to work – they’re still a lot quieter than before the lockdown.

The government says road trips in motorised vehicles, recorded at 275 automated sites, are now at around 35% to 45% of the usual level.

AA president Edmund King has told the BBC that – based on analysis of the official figures and his organisation’s own monitoring – traffic volumes in Britain are now “akin to those in the early 1970s”.

Edward Heath was prime minister, the UK joined the European Economic Community, money went fully decimal, David Bowie rebranded himself as Ziggy Stardust and almost half of all adults smoked – many while at the wheel. 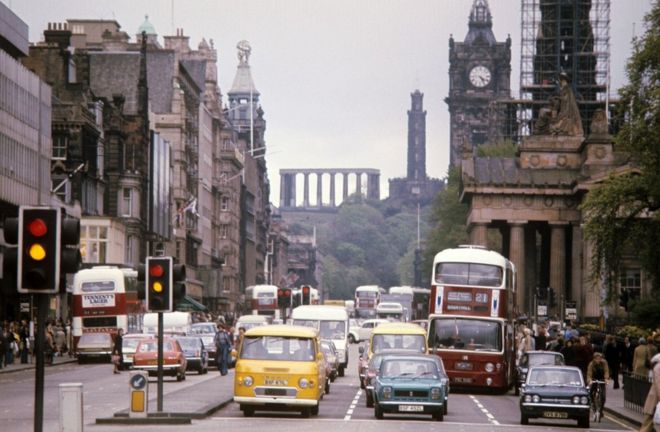 The world has changed, but does this temporary situation on the roads offer a glimpse of how it was to drive back then?

“It was a very different era,” says Giles Chapman, author of Cars We Loved in the 1970s. “It was one when car ownership was still being encouraged and, far more than our own, was associated with freedom.”

One reason was that there were so many fewer of them. As of September last year, the most recent available figures, 38.9 million vehicles were licensed for use on Britain’s roads. In 1970 the number was just over a third of that, at 13.5 million.

Part of 1970s driving folklore is that one could pull up in any high street, get out, shop, visit the cinema or have a meal.

“There’s some truth in that,” says Mr Chapman. “That was in many ways still the golden age of parking. Councils were better funded and didn’t think of it as a way of raising cash, and there was no clamping.”

This aspect of 1970s driving won’t be replicated during the coronavirus crisis, however, with so many more cars on the roads today. In fact, travel restrictions mean a greater proportion will be stationary, meaning parking near home could be more difficult than usual.

At least, though, if you wind the windows down (easier now, with electronics involved), the air is likely to be cleaner than in the 1970s. 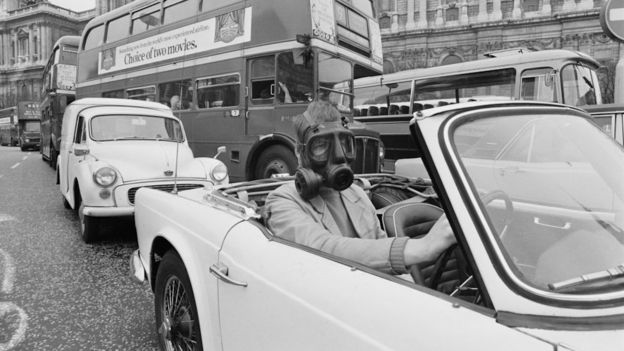 But perhaps the biggest change over the decades has been the improvement in safety. The number of deaths recorded on British speed bump-free and CCTV-less roads in 1970 was 7,499 – more than four times greater than in 2018.

“In 2018 the risk of fatality per motor vehicle mile was about one-tenth that during the 1970s,” says Benjamin Heydecker, professor of transport studies at University College London. “This is usually ascribed to the combined beneficial efforts in engineering, education and enforcement.”

Since the 1970s, seatbelts have been compulsory, while cars have been redesigned to reduce the impact of crashes for those on board and for pedestrians.

Nowadays drink driving is a huge taboo. “You shudder now when you think of dads who left their kids in the car outside the pub in the 1970s with a packet of crisps and a bottle of cola, while they stayed inside and had a couple of pints, ” says Mr Chapman.

MOTs – showing a vehicle’s roadworthiness – started in 1960, but until 1977 did not include checks on windscreen wipers, indicators, exhaust systems, body structure and chassis.

Before that they were “pretty cursory” and “really just about whether the brakes worked”, Mr Chapman says.

“Some of the reduction in deaths will be due to a greater proportion of travel on motorway roads, which are less hazardous per vehicle mile of travel,” adds Prof Heydecker.

But, at least for a bit, it’s easier to get from A to B – when we’re allowed out.