Even before Covid-19 brought production lines to a standstill, the British car industry was having a tough time. A combination of technical upheaval, political quarrelling, economic uncertainty and falling sales has been hitting hard. Investment has dwindled. Jobs have been lost. Factories are being closed.

All of that makes this particular story about our car industry unusual. Because, although it’s set against the backdrop of uncertainty caused by Brexit and many other factors, this is a good news story. It’s a good news story about a factory that has received major investment, increased production and shown that British manufacturing is as good as any in the world. In an industry in tumult, this factory has remained as calm as a Japanese zen garden. Except it’s in Derbyshire. 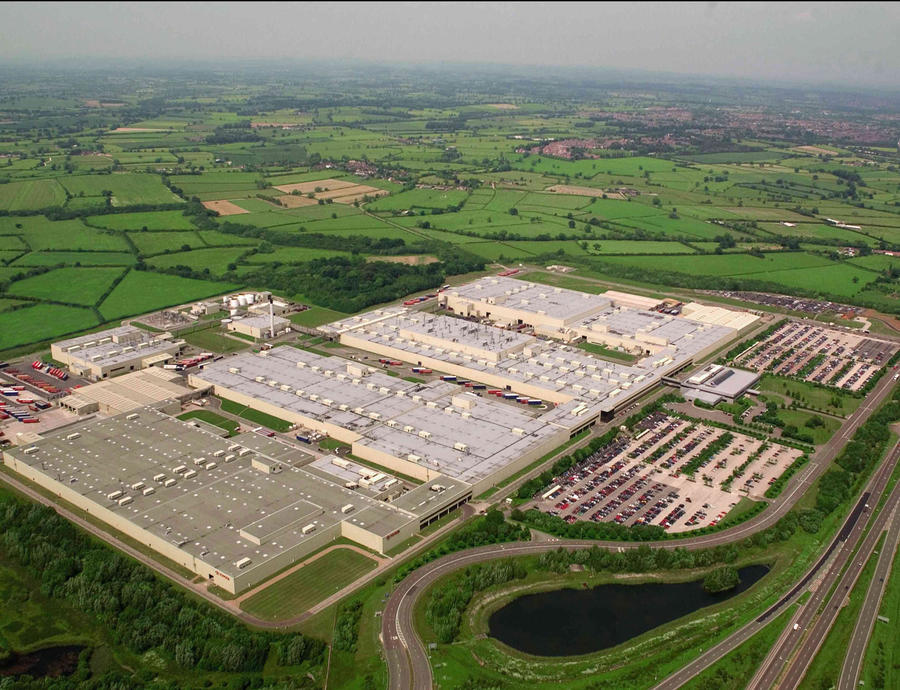 Toyota Motor Manufacturing UK opened in Burnaston in December 1992 and began building the Carina E. Since then, it has produced various generations of the Avensis, Corolla and Auris – solid, if uninspired, cars that kept the production line humming but don’t exactly add up to the finest manufacturing legacy.

However, the Auris was replaced last year by the new Corolla, a refreshed, rejuvenated machine that has proven a big success. While total UK car manufacturing output fell by 14.2% in 2019, production at Burnaston rose by 14.7%, with 148,106 Corollas rolling off its lines.

That figure is unlikely to be maintained in 2020. At the time of writing, production at the Toyota factory was, as with every major plant in the UK and most worldwide, suspended. But the impact of that will be judged later. For now, let’s focus on the good news story. 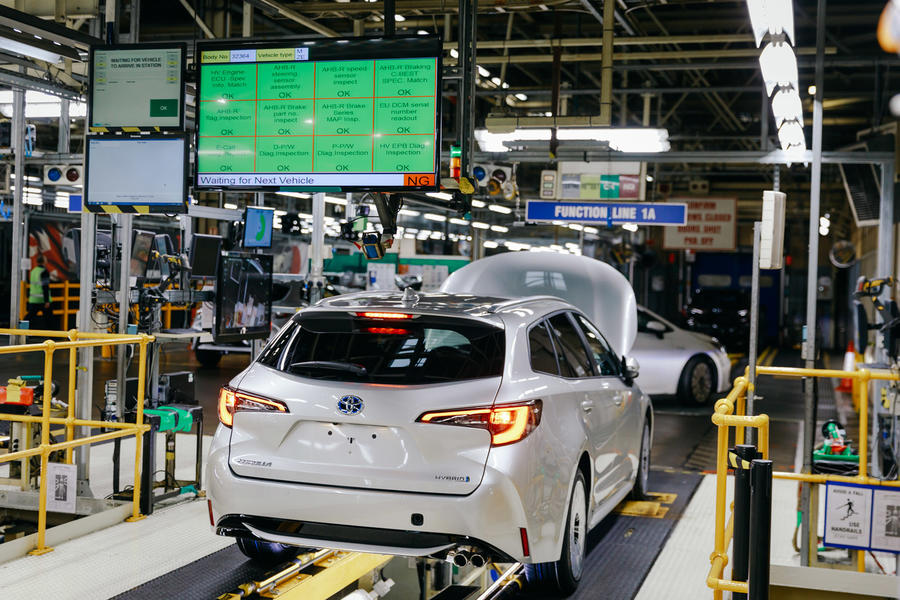 Besides, when Autocar visited Burnaston in early March, social distancing had extended only to not shaking hands and standing farther apart than usual. Production was still in full flow, with 2600 staff working two shifts per day to make a new Corolla every 89 seconds.

The slick operation is overseen by managing director Jim Crosbie. He’s only been in this role since January but has spent 19 years at Toyota, starting at Burnaston before spells in the Czech Republic and at the firm’s engine plant in Deeside. He’s seen how Burnaston has grown, both in output and expertise, over the years.

“The plant is getting on for 30 years old, and our skills, knowledge and capability have increased hugely,” he says.

When Carina E production ended in 1997, it was replaced by the Avensis. The following year, the Corolla was added as a second model line, succeeded by the Auris in 2007. After two decades as home to two models, the discontinuation of the Avensis in 2018 meant efforts were focused on one car again. Happily, as previously noted, it’s a good one.

That the Corolla succeeded the Auris (actually, it was originally launched under that name) didn’t automatically mean the UK would get to build it. The confirmation of that came in early 2018, following a £240 million investment to upgrade production lines for the new TNGA platform the Corolla sits on.

“We were delighted to get the model,” says Crosbie. “Being honest, we’re quite happy with the name change back to Corolla. It’s not just a European model; it’s one of Toyota’s key global brands. “In the past, some of the models built here haven’t been, can I say, the most exciting to look at, but that has completely changed with the Corolla. The members here are really enthusiastic about it. It’s good when you’re building and producing a car you know customers will enjoy. That satisfaction and pride is really important.”

While securing a new model on a new global platform is a major positive, Crosbie says the “huge change” wasn’t easy to make.

“We knew from other plants that had switched to the platform before us that it was a big challenge,” he says. “We needed to add around 200 new robots, change to an aluminium bonnet and a plastic rear door, change to ultra-high-strength steel and introduce a new paint line in our plastic shop for bumpers.

“Those are all massive changes. We’ve introduced new robots before, but not 200 at a time.”

The new robots and techniques have been phased in where possible. For example, employees in the welding shop were sent for training with the robots’ manufacturers before the robots were introduced over time.

It helps that many of the staff at Burnaston have been there since it was formally opened by the Prince of Wales in 1993. “We have several hundred people who celebrated 25 years here recently,” notes Crosbie. “People have been very loyal.”

Crosbie says the support received from Toyota in Japan was “much reduced compared to previous major model changes”. That’s not through a lack of interest, though, but because the plant doesn’t need the help.

“In the beginning, this was literally a fresh site, so we had lots of support from Japan,” he says. “Through the years, we decided we should be capable of doing certain things by ourselves, and Japan has recognised that, so our self-reliance has grown.

“We even work directly with Japanese equipment and parts suppliers now. It’s win-win, because it means the resources for research and development and so on don’t need to be used here so can go elsewhere.”

Still, while HQ has been relatively hands-off, there’s still pressure to maintain Toyota’s formidable reputation for build quality. “Right from launch, the very first car has to be top quality,” says Crosbie. “It’s a day-to-day job: making sure we build the vehicle to the correct standard and quality level. Early shift, late shift, no matter what the time: each vehicle must be exactly the same.

“It sounds straightforward, but it’s extremely challenging to make sure that happens. Toyota doesn’t get a reputation for quality by not being skilled at doing these things, and a lot of our processes are about making sure we can confirm the quality of each process. Toyota is famous for its Jidoka quality assurance method. If there are any doubts, pull the Andon: we’ll stop the line and sort it out.”

The Andon? Spend any time at Burnaston and you’ll hear the Andon. It’s a jaunty Japanese chime that’s set off by a worker pulling a cord. They do so whenever they encounter a potential issue: a production blemish, a screw that didn’t thread right and so on. It stops the line and alerts a manager, who helps fix the problem before production resumes.

You might expect managers to wince when they hear the Andon, because it signals a production delay, but it’s actually music to their ears.

“Our production line moves quickly,” says Crosbie, “but we make clear with members that safety is the first priority, both of the product that goes to customers and of our members. The second priority is quality: ensuring the product is right.

“We make sure members have the knowledge to know if a product is right or to detect an abnormality. If they pull the trigger and shoot that bullet and it doesn’t feel right, pull the cord and we’ll fix it.”

Focusing on small issues that are within its control has helped Toyota UK navigate the big issues outside of its control. Yes, we’re talking Brexit. Toyota’s bosses have been clear about what they want from a future UK-EU trade agreement. “Zero tariffs, as smooth a customs deal as possible and unified regulation,” Crosbie helpfully summarises. But while there have been warnings that Burnaston’s future could be in doubt if a suitable deal isn’t agreed, that hasn’t led to a loss of jobs or investment – unlike with factories elsewhere in the UK. Indeed, there are positive signs for the future: later this year, Burnaston will start producing Suzuki vehicles on the TNGA platform as part of an agreement between the two firms.

“The uncertainty of the last few years has been tough, no doubt,” admits Crosbie. “But our time is spent on the stuff we can control: quality, safety, performance and delivery. If we do that, we’ll be ready for both challenges and positive opportunities that come our way.”

When Crosbie spoke to us, it was hard to appreciate the scale of the challenge the emerging pandemic would present to the industry and the wider world. Still, at some point, the production lines at Burnaston will flicker back into life, and recent evidence suggests it can continue to be that rarest of things in UK car manufacturing: a good news story.

Before any Corolla leaves the factory, it goes past the quality assurance team. They perform 2358 checks on the car, and it has to pass all of them.

It’s meticulous work, unhelpfully sited beneath the noisy door line. To compensate, a sound-deadening tunnel was built. Inside it, the team inspect every interior and exterior part and panel. Artificial intelligence (AI) is increasingly used, the team having developed a nine-camera set-up that inspects 50 separate items. Notably, the AI is still being validated – trained, effectively – by workers.

From there, another QA engineer jumps into the car, fires up the engine, checks the steering wheel alignment, steering angle, brakes, driver aids, headlight angles and every control, and then drives onto a rolling road for acceleration and brake tests. It’s all done at a dizzying speed.

Each car is then drenched with 900 litres of water to check its waterproofing, before its paintwork is examined in a light tunnel.

Get your eye in 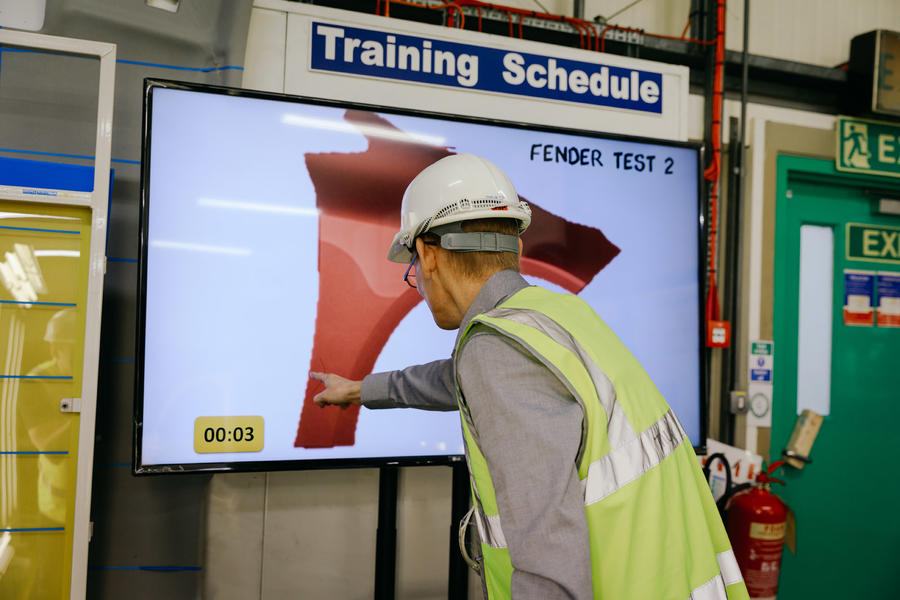 The ancient art of quality assurance is taught in Burnaston’s on-site dojo. Sadly, it’s not a peaceful wooden temple but a nondescript industrial building. Inside, people are taught how to study every panel to ensure they don’t miss the tiniest of blemishes.

I’m invited to test my skills on a special rig. A large picture of a door is shown on a screen, and I’m taught how to trace a set path across it with my hand, spotting blemishes in the paintwork as I go.

I’m given seven seconds per panel. I pick out a few blemishes, but another slips my eye. Even when pointed out to me, it’s still hard to see. It seems that, like this panel itself, I don’t pass the inspection.